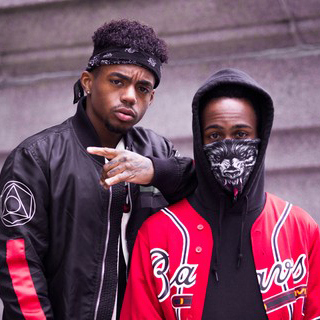 THEY. is an American R&B duo consisting of Dante Jones and Andrew Neely from Los Angeles, California signed to Mind of a Genius Records. The duo started their career in 2015, releasing debut extended play, Nü Religion, which received critical acclaim. In the same year THEY. released the commercially successful single "Working for It" in collaboration with Zhu and Skrillex. In 2016, the duo started touring with singer Bryson Tiller. In February 2017, the duo released their debut studio album, Nü Religion: Hyena.

In early 2016, the duo joined singer Bryson Tiller as opening act for his Trapsoul Tour. In summer 2016, the duo released the singles, "Say When" and "Deep End", both of which managed to enter the Billboard Twitter Emerging Artists chart. On August 8, 2016, THEY. was named "New band of the week" by The Guardian newspaper.[4] In October 2016, the duo was included in Complex magazine's "Best New Musicians in 2016 Across America" list. On February 24, 2017, the duo released their debut studio album, Nü Religion: Hyena.[21] In 2018, the duo also joined grammy nominated artist 6LACK as an opening act for his From East Atlanta with Love tour. On January 19, 2019, Drew Love collaborated with Rynx to make the song "Hold On".